Ali Hassan is a Stand-Up Comic, Actor and Chef who has performed on stages across Canada, in the U.S. and twice in the Middle East at the Amman Stand-Up Comedy Festival. 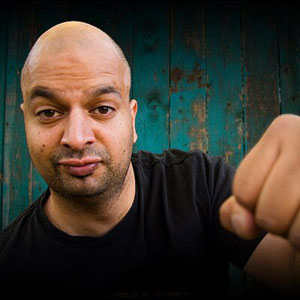 Ali has graced the Big Screen in 3 award-winning films: Breakaway, French Immersion and as the memorable Lebanese "Uncle Stevie" opposite Seann William Scott, Jay Baruchel and Eugene Levy in the hockey hit GOON...and you'll see him on screen again in MySpy and Mafia, Inc. in 2019.

Ali has also had recurring roles on television on Odd Squad (PBS Kids, TVO Kids, CBBC), Man Seeking Woman (FXX) Game On (YTV) and Dino Dana (Amazon Studios). Ali joined the cast of CTV's Cardinal, as a recurring character, starred in ABC's 2nd season of Designated Survivor and VICE's FUBAR: Age of Computer. In 2019, you'll see him on CBS's Blood & Treasure and he is on Netflix right now in The Holiday Calendar!

Ali is the host of LAUGH OUT LOUD on CBC Radio & SiriusXM, a show with a base of over a million listeners. He is also the frequent guest-host of q - the premiere national arts & entertainment show that airs on CBC Radio One, NPR and PRI. He was also the Lead Comedy Panelist on CBC Television's George Stroumboulopoulos Tonight, recording over 160 episodes with the show.

He has been invited twice to perform at the Just For Laughs Festival in Montreal and Toronto's JFL42. Ali has also performed as part of the Winnipeg Comedy Festival - a set that aired on CBC Television. Ali is also a Canadian Comedy Award nominee who has taken his solo show Muslim, Interrupted to Scotland to perform at the world's largest comedy festival, the Edinburgh Fringe Festival. Since that time he has been touring the show around Canada - 22 cities and counting - to great acclaim.

this show will be recorded for broadcast on CBC Radio

This show is a clean show suitable for all ages